9 Reasons Your Business Should be an Attention Whore 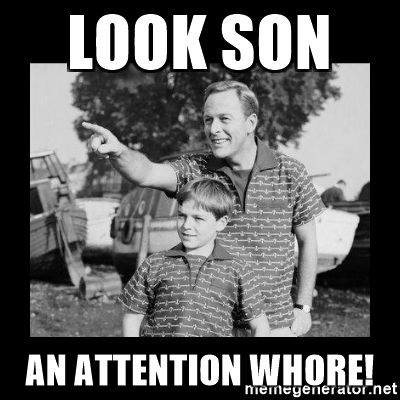 Ever heard the expressions “any press is good press,” or “any attention is good attention?”

Know why these expressions exist? Because every brand, business, startup, celebrity, musician, actor and wannabe needs to start by getting attention or they’re going nowhere fast.

The most successful people out there understand one thing. Businesses need attention to survive, because without attention, nothing else happens

Are you focused on getting your customers’ attention?

We’re all whores… paying, begging and earning attention to survive, and I typically recommend doing all three on a regular basis.

Several years ago, the internet opened the playground to everyone. Suddenly small businesses and startups were on equal footing with big brands, and huge celebrities were being challenged by snot-nosed kids in their bedrooms making videos that the world could see.

Do you realize how important that game changer was?

Most marketing execs are still at the “we just have to think outside the box to beat the competition” level.

There is no box. The box is gone. The box has left the building and it’s not coming back. Say goodbye to the box. Say it with me. Everyone. Bye bye box.

The name of the game now is to get customers’ attention by any means necessary. Whatever comes after that is important too. Things like messaging and call to action and AIDA and KPIs and KFC (the chicken company famous for selling fried chickens)

But stop trying to put them all in the same thing, all the time. get the attention first.

TRUE STORY NON-SEQUITUR: I once convinced a girl that boneless chicken strips come from boneless chickens. I told her they raise them that way, and they have to lift their necks up to feed them.

People will believe anything, but first you have to get their attention because…

1. Without their attention they don’t see you

…in the crowd. You need to stand out. Wave a huge flag and let them know you’re there

2.Without their attention they don’t hear you

…speaking to them. How could they? There’s too much noise. And even if they could hear you, how would they know that you’re talking to them?

3. Without their attention they don’t know you

…exist. They may have the exact problem you started your business to solve, but if they don’t know you exist they’ll find someone else who grabbed them by the balls and made them pay attention while you were thinking about your digital marketing strategy for Q4 and lining up the key decision makers to build a team to execute on that strategy.

4. Without their attention they don’t understand

…what you’re offering them. You’re unique selling proposition and all that other business school crap I never learned because I was too busy getting peoples’ attention playing in rock bands, writing and making TV commercials.

They have to know what you’re offering and how it’s different from the guy down the street.

5. Without their attention they do not engage you

…on social media channels, by email, by phone, in person. If they are unaware of your existence, there is a zero percent chance they will connect with you.

6. With their attention they do not interact with you

on social media channels, by email, by phone, in person. If they are unaware of your existence, there is a zero percent chance they will continue a conversation with you.

7. Without their attention they do not ask you questions

…to learn more, to see why you’re different, to make a decision to buy from you.

8. Without their attention they do not buy

…from you. Why would they? To them, you don’t exist… yet.

9. Without their attention you are not there

Without their attention, nothing else happens.

Do I have your attention?

Otter PR’s Scott Barnick On How To Become A Guest Contributor
December 7, 2021

How Funny, Edgy Or Bat S#!t Crazy Should Your Video And Social Marketing Be?
November 26, 2021