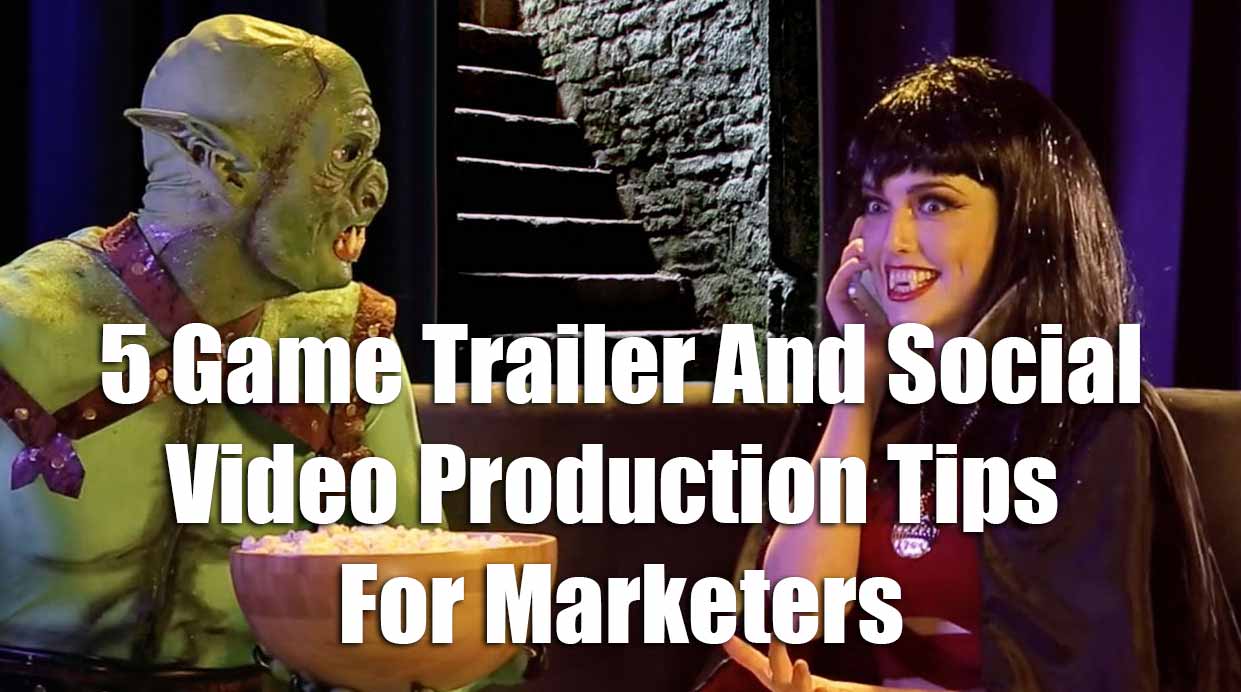 They’re windows into the soul of the game. They grab a viewer’s attention, show them what the game is all about, call them to an immediate action like downloading, buying or sharing, spark social media conversation, press and media attention, and leave a memorable impression!

1. Get The Viewer’s Attention

Just like with any online video, you’ve got just a few seconds to grab a viewer’s attention before they do something else – like click on someone else’s video!

For a recent Monster Castle Game Trailer for Tencent / SixJoy, we literally yelled at the audience using a video game version of a high-pressure car salesman.

Annoying? Possibly. But we demanded their attention in a fun, unusual and funny way.

Now that you’ve got their attention, don’t lose it. As soon as you’ve established the premise for the trailer or social video and got your audience on board, ramp it up with visuals, gameplay and sound effects.

Keep up the energy and stick with the story.

The temptation may be to cut together a bunch of game capture clips with some cool music and call it a day.

A better approach, is to build a story around some aspect of the game. This will make the viewer stick with you. Expand on one or more characters in the game. Focus on one or more weapons, superpowers or other game features. Bring them to life. Use the game environment and do something that wouldn’t normally happen in that world – like having a serious business meeting in outer space surrounded by aliens that look like dancing lobsters.

If you use that idea, I want credit.

In the Monster Castle example above, we latched on to the idea that the monsters in the game need special weapons to attack the castle, so let’s do a cheesy, local, “Crazy Eddie” style TV ad starring a high-pressure weapons salesman.

Just when they think they’ve got your trailer figured out, throw them a curve ball. That’s the part they’ll most likely remember! Zig when they think you’re going to zag.

Do something crazy. Something funny. Blow somebody up. Get them talking. Make them stick around for the CTA.

5. Include a Strong Call To Action

OK, so we got them to watch all the way through. Now, what do we want them to do? Share the game trailer on social media sites? Like it? Follow the game on Twitter? Download now? Get in the car, go to GameStop and buy the game?

They aren’t going to do all of those things, so take a minute to work out which is most important.

If the game hasn’t been released yet, you may lean toward soft CTAs like shares and likes. If the game is available now, then consider going straight for the jugular with hard CTAs like download now! buy now!

If you’re doing a series of videos, consider using different CTAs on each, and do A/B testing to see which performs best.

Above all, be creative and have fun with it. After all, you’re selling video games!