How to Write and Produce a Video Ad Campaign Series 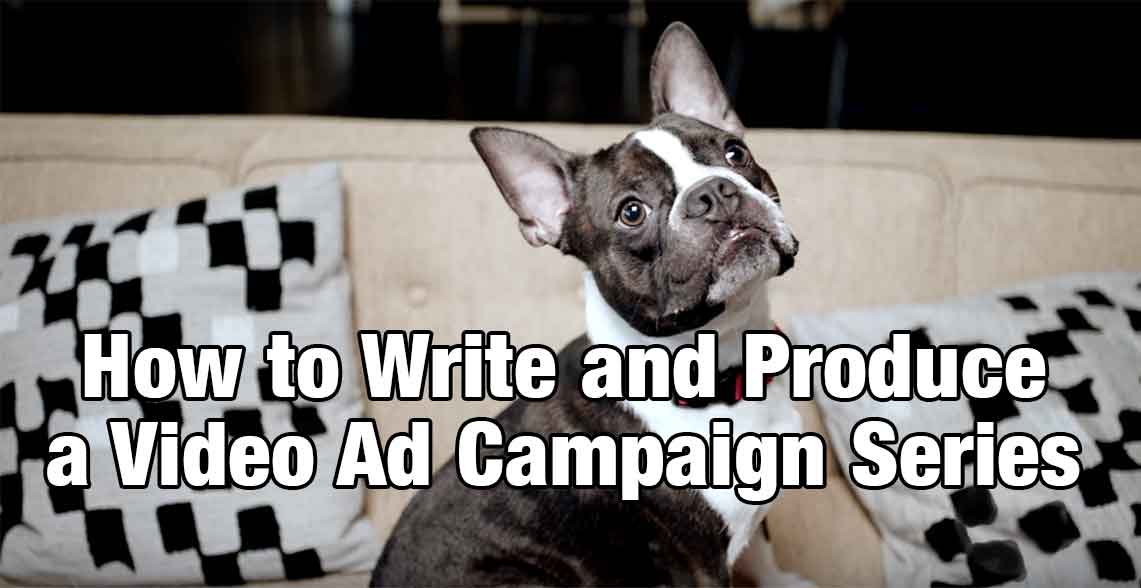 If you really want to make an impact with video marketing, develop and launch a video ad campaign series.

Single video ads, game trailers and social media videos are of course very effective, and a series of videos, all in one campaign, puts that success on steroids.

A video ad campaign is a series of paid video ads, or organic social media videos, all focused in the same direction to engage your target customers promote your product or service.

So Why a Video Ad Campaign Rather Than Disconnected Ads?

The main reason is brand recognition! You want to develop a series of videos that all have a consistent theme or what I call a “creative wrapper.”

We produced a series of 20 video ads for Redbarn Pet Products with the concept of “the mind of a dog,” or “what dogs are thinking.”

This wrapper expanded to include cats as well, all with the same theme.

Another good reason for a video ad series is to keep creative and production costs down.

How many times have you gone to a website or listened to a podcast where you’re forced to watch the same video ad over and over?

Sometimes they want to introduce new ads one by one.

Sometimes it’s because it’s the only one they have.

Sometimes, it’s enough to make you just skip the content you wanted to watch or listen to.

Now imagine you’re being shown a variety of video ads, rather than the same creative each time. The user experience becomes far more enjoyable and useful.

How to Develop a Video Ad Campaign Concept

As opposed to a single video ad or commercial, think in terms of a video campaign idea or what I call a “creative wrapper,” that can span several videos or more.

Once you’ve established that, you can plug various scenarios into the wrapper.

For example, we developed a video ad series a company that administers employee assessments to help employers make the right hires.

The Wrapper: “in each video ad, the boss, Bob, will try to fire an employee but his wacky plan will backfire.”

Here’s an example in which Bob gets double-talked by his top salesman.

We used the tagline “Hate Firing?” and presented the solution of using assessments to hire the right people, so you don’t have to go through the nightmare of firing them.

How Many Videos Should Be in a Video Ad Campaign?

To build brand recognition, increase opportunities for unique CTAs and keep video creative and production costs down, I suggest starting with 6 -12 videos.

Depending on the creative requirements, 6 videos can be shot in 1-2 days and edited in less than a week.

Additionally, you’ll have a variety of video ads to experiment with, AB test different ad copy and measure results.

With a single video ad, game or app trailer or social media video, you have only one shot to get it right.

With a series of video ads, you have more than one opportunity to connect with customers.

The 20-video series we wrote and produced for Redbarn Pet Products has an overall view count topping 12 million views.

Individual video ads range from 40k views to over 6 million views per video.

The range can be attributed to a variety of factors including how aggressively they are being advertised on social media and other channels, how well the individual creative is connecting with viewers and which ones have caught a ride and were shared organically.

Let us know if you need help developing the creative and/or producing video ads for your company. You can contact us here.