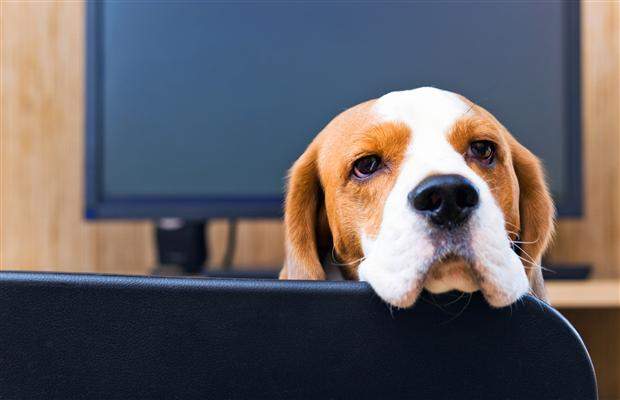 Other than ping pong tables and cappuccino makers, nothing says “this office is cool” like a canine coworker.

But according to a recent survey, most dogs would rather stay home than go to work with everyone else. Contrary to popular belief, canines are content sitting on the couch or chasing stuff in the yard, and would rather not be bothered wandering from office to office, and posing for cute office dog Instagram photos.

“I feel like I have the responsibility of making the office hip and trendy… that’s a lot of pressure,” stated Mr. Macintosh, a Bulldog mix from San Mateo, CA. “I mean, sure, we’re in the silicon valley and all, but how cool can a tech startup be? It’s not like we’re making biscuits.”

Some of the more telling complaints from office dogs surveyed include:

“Frankly, I’d rather work from home and lick my balls without being judged, added Max, a Border Collie from Manhattan. It’s not like I can just not lick them. That’s my job. They all have their jobs to do and I don’t judge them. I don’t say ‘hey Donna, stop typing emails… it’s disgusting,’ or ‘hey, look at bob Bob filing that report… I wish I had opposable thumbs.'”

For the many dogs currently working from home on a freelance or part-time basis, they miss the camaraderie of working with other dogs.

The grass is always greener on the other side of the cubicle.