Is Your Startup Chicken S#!T or Procrastinating? 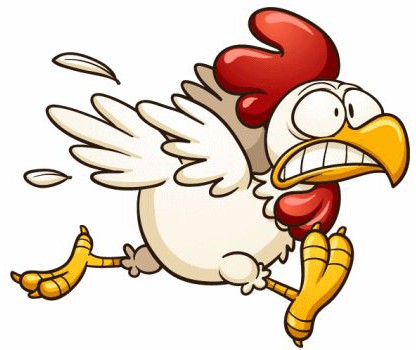 Too many startups are ready to launch and they don’t know it yet. Worse yet… they’re scared, but they HAVE to launch. Now.

Startups need to launch. That simple. Nothing will ever be perfect. Go. Make changes as you move along. Collect feedback. Screw up. You will. Nobody will know, as long as you fix it quickly.

Back in the old days a guy thought of an idea like “let’s make round wheels,” and even if 50 other guys thought of the same thing, they were living in caves on different continents with no communication.

There was enough room for them to all invent the round wheel and by the time historians tried to figure who invented it, they were all dead and nobody cared. Nobody knows. They can peg it to a time period but who cares?

We all drive around on round wheels now, and someone got rich on that, somewhere – way back when.

Having a proprietary solution  REALLY counts.

Having patents and trademarks REALLY counts (if applicable).

You thought of a great idea, now get it out there and make some money. I know, it’s not about the money, it’s about your dream and vision of changing the world, or maybe not. Maybe you’re a greedy capitalist pig that simply wants to build a business and turn a profit while supplying hundreds or thousands of jobs to people who desperately need them, but either way, as a marketing agency sitting on the promotion side of this whole thing, and wanting you to succeed either way, I vote that it’s very much about vision, confidence, drive, budget (that’s the money part), and execution.

If you aren’t making money, you won’t be able to pay your shareholders, put shoes on the feet of poor children in South American Countries with two for one deals, (Hi Tom), give water to thirsty Africans or pay the people in your office.

Here are the five most common reasons I see for startups delaying launches:

1.  Everything Isn’t Perfect Yet. General George Patton said  “A good plan violently executed now is better than a perfect plan executed next week.” What he meant was that the world doesn’t stand still. You Gotta move!

2. What if we fail? Chances are you will. But as Rocky Balboa said “It ain’t about how hard you get hit, it’s about how hard you can get hit and keep moving forward.”  You may pick yourself up in an hour, a week or a month. Rocky picked himself up in a few seconds. he had to. His future was on the line.

3. But Everyone is Expecting us to Succeed! In the the big picture, not only is no one expecting you to succeed, except the loyal group of supporters you’ve assembled via social media, KickStarter… but the world in general doen’t even know you exist yet. That’s the perfect time to make mistakes! Reinvent yourself based on those mistakes

4. We Have Limited Funds. We have to get it right The First Time Or The Whole World Ends. Well then don’t spend it all in one place! Have a digital marketing plan. Prioritize. Decide which tactics and executions are most important to build revenue and launch into the next phases. But most importantly, have all those phases outlined first.

5. We’re waiting on approvals: So your partners are off having babies, finding themselves in the Himalayas, and smoking Peyote in Yosemite. Great! So you’ll be reviewing marketing partners for the next three months and get back to them then. That’s fine, but as your team members are making babies and finding inner peace in Himalayan hot springs, the world is passing you by, people are launching the EXACT SAME IDEA you though of in college and they’re already first to market.

So What Do You Do?