5 Things Startups Think About Themselves That Are Wrong 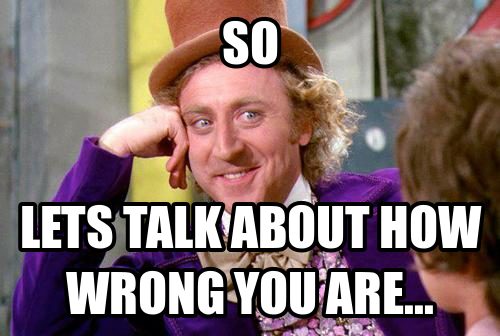 The easiest thing in the world is to have an idea. The hardest thing is to successfully execute on that idea and turn it into something that creates customers and actually turns a profit.

I talk with startups every day, and the one thing many of them have in common is that their self perception is often out of whack with what people actually want or need. Lots of valuable time, money and most importantly, energy, get lost this way via development, marketing and PR.

Not yet you’re not. Your vision includes the potential to change some part of the world and people’s lives, but until you’ve attracted enough customers, subscribers, media attention, or social media swagger to actually start making a difference,  you’ve changed nothing.

Take a realistic look at when that moment will be that you go from the “idea” of changing the world to “actually” changing the world. That’s what you’re shooting for, and if you’re smart, driven and talented you’ll get there.

Are you sure? Have you really looked? Are you really as unique as you think or are? Are there others like you out there? Don’t be afraid to look. If there are similar solutions to the problems you’re solving, you’ll be far more successful if you know now, than if you find out later.

If there are, don’t give up. Just play to your strengths. Differentiate. Never give up. Be smarter.

3. We’re newsworthy. The Media Will Swoon When They Hear About Us!

Unless you can clearly tell them why they should, they won’t. Is what you’re doing proprietary? Do you have the patent for it? Are you in a position to license it? Does it solve an existing problem or are you trying to create a market around something that people don’t necessarily need? Do you have a name investor on board? Is what you’re doing so new that it’ll stop everyone in their tracks?

Take off the rose-colored founder glasses you were wearing when you thunk up the idea and created your startup, and look at your business through the eyes of your customers, potential investors and the media. What about you will attract them? What will get their attention? What problem are you solving, what makes you so special?

Now is not the time to be lofty or arrogant. Be realistic. That’s how you’ll be judged… realistically, by people who have no skin in your game other than what you can do for them right now.

If you identify striking comparisons to other existing businesses, take them on in a smart way, and defeat them. All’s fair in love and war… and business.

Do it wrong, and you’ll just be tweeting and pitching about stuff that adds up to a social media and PR snooze fest. You won’t get any attention. People want to see the story start where the story starts.

Start hyping and hit hard during your pre-launch. Tell YOUR story.

Even if your product or service isn’t ready yet, create opportunities for people to care, become involved and build your community so that when you launch you have a base.

It will work, if you do it right, but again, you have to be smart. Alert the media. Let them know your value proposition and what will make you special. Build social media communities of like-minded people who will be willing to wait until you’ve officially launched and/or support you and spread the word during your beta phase.

Set up your social media channels now, before you launch. Share valuable information related to what you’re doing, that will appeal to your demographic.

Start an early sign up page and collect email addresses and cell numbers so people can be alerted via email and text when you’re live.

5. Marketing Our Startup Will Be Somebody Else’s Job, Later On!

You think your job is to build your startup, then you’ll go to a marketing, PR or creative agency and let them take it from there. Or maybe you’ve tried your hand at marketing it and you’re not getting anywhere.

You have to build the marketing in from the start and work as hard at your marketing as you did at starting your business.

The time to bring in a marketing agency or consultant is at the beginning, to help you answer the questions that will be asked of you by the media, influencers, fans, and your future customers before the questions are asked.